This “project” is both a Before & After and a One Little Thing.  It’s truly SO easy, but makes quite a difference.  I used to sit at my desk and stare at a bookshelf, there’s a folding screen in front of all but one shelf.  But that one shelf was a DISASTER (see “Before” photo, below.)  Looking at that ugly shelf made the room seem cluttered, reminded me how many other things in the room needed to be organized, and in general, stressed me out.  So I spent an hour or two re-doing it.  And voilà: 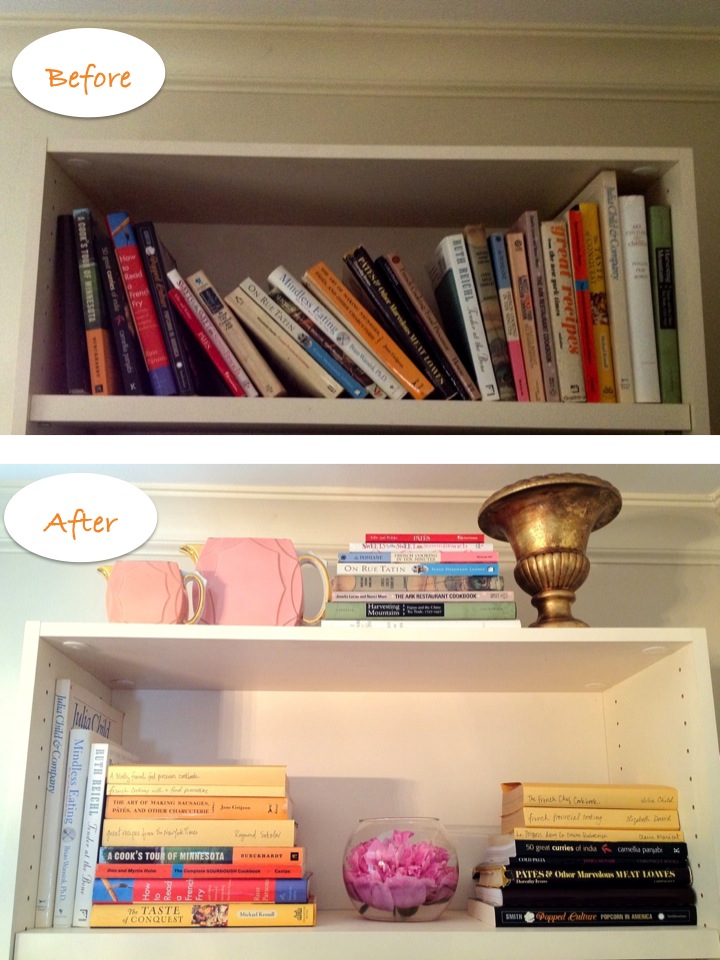 Since I had to keep all of the books in this bookcase (no matter how ugly their spines), I tore a page (excuse the pun) from HGTV stylists and covered some of the least attractive books in paper I had lying around, which happened to be gold.  (I have white paper, too, but decided that was too boring!  Especially on a ‘blah-looking’ white shelf.)

I organized the rest of the books by color groups and then by size.  I tried each stack vertically and horizontally and settled on what worked best.  There were enough books that in order for the shelf to not looked cluttered, I decided to split the books between the shelf and the unused top of the bookcase.

Finally, I looked around the room to see what other items would accent the books.  (The gold vase is from The Cottage House; the teapot and creamer are 1940s Czechoslovakian from a Paris flea market.)

It’s a very small thing, but I much prefer gazing up at the “After” shelf than the “Before” version!